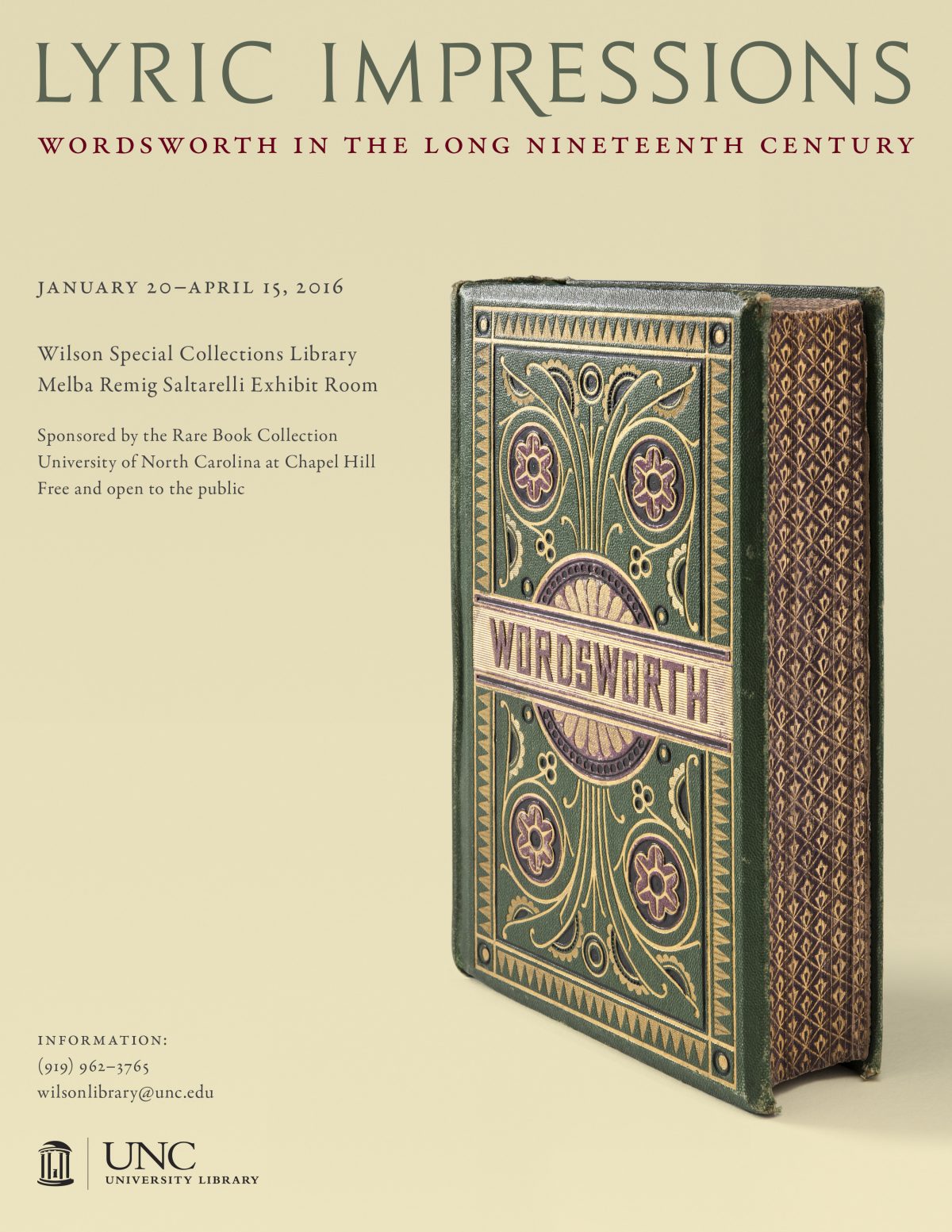 The Rare Book Collection held the opening reception of Lyric Impressions: Wordsworth in the Long Nineteenth Century on 22 February, followed by a lecture from Professor Duncan Wu of Georgetown University entitled “Wordsworthian Carnage.” As the title suggests, the exhibition situates Wordsworth in a larger historical context. Less overt exhibition objectives included publicly establishing RBC’s scholarly authority in this area and thanking current donors while eliciting future ones.

The contextualizing objective allowed curator Elizabeth Ott to draw on their repository of eighteenth through twentieth century British Romantic materials. The items evoked resonance and wonder for visitors. Those versed in Wordsworth ogled marvels, like the first edition of Lyric Ballads (1798). Others found resonance in Wordsworth’s broader cultural influences. I became arrested by The Prelude: An Autobiographical Poem, 1799-1805 printed by the Doves Press in 1915, displaying Wordsworth’s relevance in posthumous aesthetics, here the Arts & Crafts movement.[1]

The exhibition materials, their interpretive text, and the opening lecture by a foremost scholar on Wordsworth allowed the RBC to highlight its strength on the period generally and its collection specifically. This underlines RBC’s dedication to engaging with its collection publicly and in scholarly discourse, fulfilling the exhibition’s scholarly objective.

Donors ensure the RBC’s growth and potential for scholarship. In this instance, Mark L. Reed, III, emeritus professor of humanities at UNC, donated the core of the Wordsworth collection that inspired the exhibition. Lyric Impressions fulfilled the objective of thanking current donors. The attention given both to the materials and to Professor Reed for his 1,700-volume gift encouraged the interest of future donors, who may be assured that their materials and involvement will remain publicly relevant.

In terms of size, the exhibition was approachable, and its scope targeted Wordsworth and the long nineteenth century, from the French Revolution to the First World War. Ott selected an array of 140 materials from the Wordsworth collection, from first editions to picturesque mini calendars. While the physical layout encouraged meandering, a glance at the exhibition reader’s table of contents clarified the cases’ intended order. The interpretive text for each object and case connected the relevance to Wordsworth and contemporaneous changes.   The primary weakness of the exhibition, however, lay in the exhibition plaques’ legibility; font size, visual density of the text, and lighting compromised the reading experience.[2] While the descriptive text suited a scholarly audience, legibility issues challenged older audiences, demanding the use of readers.

Lyric Impressions epitomizes a specialized and documentary approach to collection development and its presentation to the public. These practices common to academic rare book collections make the RBC appealing to donors and visitors alike.

[2] In approaching evaluation of the exhibition viewing, I drew upon the standards laid out in “Leab Exhibition Awards Evaluation Criteria,” RBMS Rare Books Manuscripts Section of the Association of College and Research Libraries.

N.B. The image of the exhibition poster included at the beginning of this post was drawn from UNC’s previous exhibits website under the purview of Fair Use.