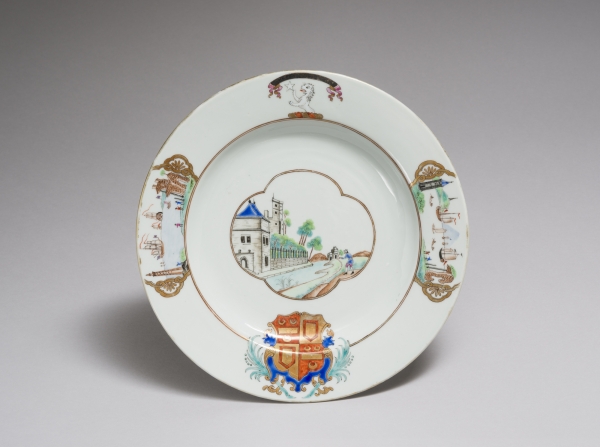 UNC Department of Art Professor (and current head of department) Carol Magee required her Fall 2015 Art Historical Methods students to write an analysis of one of the objects in the Ackland Art Museum’s displayed collections using one of the methods covered over during term.  As a trainee in social art history and the study of material cultures since undergraduate, my natural inclination was towards an object rich in contextual information, as well as elegant execution.  This led me to select the Qianlong porcelain plate (accession number 2011.19) pictured above. The photograph is drawn from the Ackland’s online collection and reproduced here under the principle of Fair Use.  Below is the social art historical analysis I conducted.

The Qianlong porcelain plate, accession number 2011.19 at the Ackland Museum, represents the intersection of artistic, economic, and social interactions between Europe and China in the mid-eighteenth century.[1] Upon initial examination, I thought that 2011.19 might serve as an example of art mediating a colonial relationship. Further research, however, revealed that the plate is a confluence of the artistic and economic interactions between East and West, not representative of a colonizing relationship. The Qianlong government denied foreigners all but the most limited economic exchanges with their country, and the plate decoration announces that Chinese artisans adopted popular Western styles to increase sales, appealing to Westerners’ growing obsession with the exotic. Analyzing an object for which social, political and economic context is key to its understanding and interpretation demands a social art historical approach.[2] 2011.19 fits ideally within the examination of methods of production and power dynamics key to the New Art History.

Made circa 1745, this high fire porcelain plate—with low fire polychromatic enamel decoration—depicts both the heraldic crest and coat of arms for Admiral Sir Francis Holburne, as well as three harbor views known well by British naval officers travelling between Britain, India and China.[3] During the mid-eighteenth century, the Qianlong government maintained strict control of their land, making Canton (now Guanzhou) the only port city in China accessible, in part, to Westerners. Foreigners weren’t permitted to leave the small quarter of the city granted to their trading companies and endured complicated and inconsistent levies against their imports and exports.[4]

Despite these restrictions, the artistic practices of both cultures influenced one another significantly, though with different audiences and for different reasons. The Chinese artisans decorating the plates and designing the forms were interested in the changing fashions of Western visual culture so to better serve their customers and to speed up production. As Andrew Madsen and Carolyn White point out in their comprehensive introduction to the practice and history of Chinese export porcelain, if a particular pattern became popular, Chinese artisans would create a surplus to fill orders for the next season.[5] I argue that this practice possibly explains why the waterscapes painted on Admiral Holburne’s service exactly match that of both Lord Anson and of Sir George Cooke.[6] Though Holburne was a naval officer during the heyday of the British East India Company, he sailed West—remaining in the waters near England or sailing to the West Indies or Canada—rather than East, the course that would have resulted in his familiarity with the scenes depicted on this plate.[7] Though he likely would have known Plymouth Sound on the southern coast of England, he perhaps never himself witnessed the Whampoa anchorage near Canton, nor Fort St. George in Madras, both of which compose the major anchorages on the journey between England and China.[8] Holburne’s order of a service depicting the rush East reconfirms just how fashionable it was to show off knowledge of or connections to these popular, exotic places.

Chinese artisans regularly displayed knowledge of Western stylistic developments and visual interests stemming from the new British middle class’ growing thirst for items displaying an exotic aesthetic. Plate 2011.19 provides the ideal case study for the display of this awareness. Thomas Litzenburg breaks down the major content themes of British interest into seven categories, three of which are contained in the plate’s decoration: (1) Armorials, (2) Topographical and Architectural Views, and (3) Marine Subjects.[9] Armorials exploded in popularity from the end of the seventeenth century until the end of the eighteenth. Chinese painters honed their copying skills from gaming counters, bookplates, painters’ books for coach doors, other ceramics, and paintings, engravings or sketches of the family coat of arms provided by the merchants placing the order.[10] The sheer volume of connections traced back to and from export porcelain—enumerated in David S Howard’s text on armorial porcelains—makes apparent how important these services were in displaying the socio-economic weight of these delicate items, which will be further discussed below regarding Chinese artistic influence on the West.[11] The changing tastes in ceramic border styles were also of interest to the Chinese artisans. Though Holburne might have ordered the Meissen-style cartouches and quatrefoil center panel specifically after becoming familiar with them during his time sailing the North Sea in 1740, I’m inclined to assume that Meissen borders were simply the most popular style of the time and thus came standard with the set that was pre-painted in readiness for a rush of orders, since several other services exist with the same scenes framed by identical cartouches and quatrefoil.[12]

While a more formal art history and connoisseurship were used to discover the connection between these visual sources and their porcelain counterparts, this network of art references hold relevance to a social history of art, clarifying Western motivations in selecting Chinese porcelain. While China showed determination in remaining current on Western styles purely for economic gain and to dominate the market, European gentry and the fledgling middle class displayed an energetic interest in incorporating chinoiserie into their material lives as an assertion of the value of their socio-economic status. The choice to commission porcelain from China rather than the slightly less consistent Western porcelain companies emphasizes Britain’s growing obsession with the exotic. Respectability remained bound up in the pairing of decorum with its coordinating material goods.[13] Since the fledgling middle class of the Enlightenment sought the status of the gentry, they ordered Chinese porcelain to serve as the material evidence of their elevated social status. It is my opinion that the landed gentry responded to this threat by reinvigorating their own commissioning of Chinese export items, as evidenced by the steep increase in armorial porcelain dinner services. Armorial porcelain with depictions of foreign travel through topographical and architectural views, as well as marine subjects, served as the upper class’ proof that they not only had knowledge of the exotic market, but also maintained high-class taste.[14] The scenes from Holburne’s service reinforce this idea. Each scene is drawn from a fantasy of exotic travel and famous images drawn from that travel, and all of them are identical to the service of the famous Lord Anson, who was Lord Commissioner of the Admiralty, a member of British Parliament, and a circumnavigator the globe.[15] Particularly due to Lord Anson’s poor opinion of Holburne, it seems likely that Admiral Holburne would hope to benefit his own position by flattering a man of such social power in Britain not known to favour him.[16] Thus Holburne not only reinforces his personal connection to the landed gentry through the inclusion of his crest and coat of arms, he also restates his socio-political status by displaying the same harbor scenes on the service owned by Lord Anson himself.

Plate 2011.19, through the lens of social art history, becomes an embodiment of the social, political and economic factors at play in the East-West trade of material good and artistic styles. Chinese artisans benefited economically from the use of Western imagery while the upper and middle classes of Europe, particularly Britain, used export items as an expression of social power and as a political tool. Without the social art historical approach, the evidential value of the contents of the plate would be lost to more pure stylistic analysis and connoisseurship.

[8] The Plymouth Sound composite scene is on the left side of the lip. The Whampoa anchorage is located on the right. The Madras anchorage is in the center of the well.

[15] The Plymouth Sound, Madras and Whampoa scenes are all drawn from engravings made by well-known artists at the time, again restating the assertion of power built into the imagery of these plates; not only do these upper-class commissioners have first hand experience with these new, exciting places, they also have the taste to identify and incorporate the best of their visual culture. In fact, not only did Anson know of one of the artists, Piercy Brett, Anson also requested Brett’s presence on his circumnavigation of the globe, thus proving himself the driving force behind the public’s access to views of the wider world; David Sanctuary Howard and John Ayers, China for the West: Chinese Porcelain & Other Decorative Arts for Export Illustrated from the Mottahedeh Collection (London: Sotheby Parke Bernet, 1978), 202-04.

[17] Debate surrounds the citation for curatorial notes. This is what the Chicago manual of Style Online suggests for curator’s statements, so I felt that this version is the most authoritative. An alternate form of citation is as follows: Riggs, Timothy. Curatorial notes for accession number 2011.19. Chapel Hill, NC: Ackland Art Museum. 17 November 2015.